GitLab is a platform where you can create and build applications. You can use your own instance or an existing one.

In the following guide you will update a GitLab project with its own OpenTestFactory workflow that will run whenever you push changes on your project.

You need to have access to a project on a GitLab instance, and you need to be able to start a GitLab pipeline on that project.

You also need to have access to a deployed OpenTestFactory orchestrator instance, with a corresponding token, that is accessible from the GitLab instance.

You will use the opentf-ctl tool.

You need to define two environment variables. You can do this at your group level or at your project level.

One variable, OPENTF_CONFIG, is typically shared. It references your OpenTestFactory orchestrator instance.

Depending on your preferences and security requirements, you can share the other variable, OPENTF_TOKEN, between your projects or define one per project.

If you do not want to give those variables those names, you can freely change them, but then you will have to specify them explicitly in your GitLab pipeline, using the --opentfconfig= and --token=command line options below.

If you are using a local deployment, on your workstation, as for example described in Docker compose deployment, it will probably look something like the following:

If you are using a non-local deployment, on your intranet or open to the internet, as for example described in Kubernetes deployment, it will probably look something like the following.

(In the example below, the HTTP protocol is used. If your deployment is using the HTTPS protocol, which is strongly recommended, replace the port values with 443.)

If you have not tested your configuration file before, it is a good idea to test it now.

On your workstation, install the opentf-tools package, using the following command:

Then, copy your configuration in a config file on your current directory, and use the following command:

Go to your project (or group) Settings/CI/CD panel and search for the Variables section.

In this section, add a new variable OPENTF_CONFIG with the value above. It should be of type File. 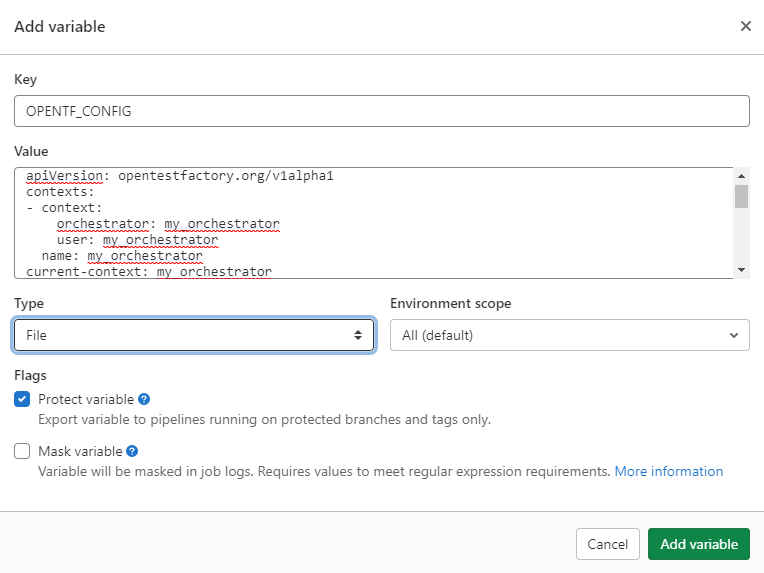 The OPENTF_TOKEN variable should contain the token you want to use to communicate with the orchestrator.

Add a new variable OPENTF_TOKEN with the value your token. It should be of type Variable. 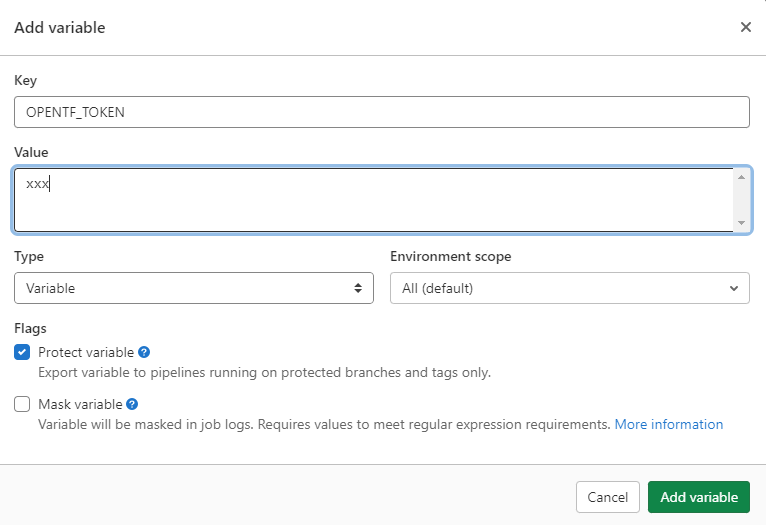 The two environment variables, OPENTF_CONFIG and OPENTF_TOKEN, will be available for use in your pipeline jobs.

In the screenshots above, the variables have been flagged as “Protected variables”. It means they will only be usable from protected branches and tags, which is a good practice: you do not expose your token to everybody with access to your project, and you prevent possible undesired code execution on your execution environments.

Now that your two environment variables are defined, you are ready to integrate your OpenTestFactory orchestrator within your GitLab CI/CD.

This section assumes a basic knowledge of GitLab CI/CD. See “Getting started with GitLab CI/CD” for more information.

There is no required location for your project’s workflows, but it is a good practice to put them in a single location. .opentf/workflows is a good candidate.

If you have a .opentf/workflows/workflow.yaml orchestrator workflow in your project, you can use the following .gitlab-ci.yml file to run it each time you make changes to your project.

The pip install ... part ensures that the most recent version of opentf-ctl is available on the runner, and the opentf-ctl run ... part runs the workflow and shows its progress.

Sometimes, you need to share information—variables or files—for your workflow to work.

For variables, you can do it through the variables statement in your .gitlab-ci.yml file, prefixing them with OPENTF_RUN_, or pass them using the -e command line option (without the OPENTF_RUN_ prefix).

For files, you pass them using the -f my_file=my_file_path command line option.

The following example will run a .opentf/workflows/my_workflow_2.yaml workflow, providing it with a file file (which content will be the one of my_data/file.xml) and two environment variables: FOO and TARGET.

The opentf-ctl tool you just used offers additional options that can be useful in some contexts.